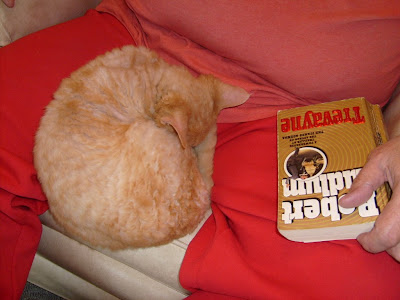 I spent the morning in Lapdaddy's lap (of course) while he read his book. Mommy was reading too and wanted to share her delightful story with you. 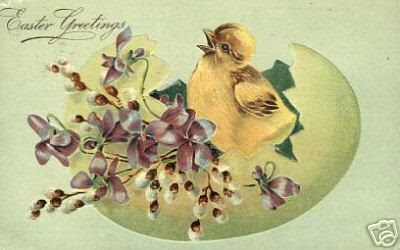 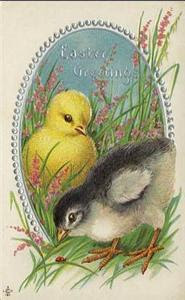 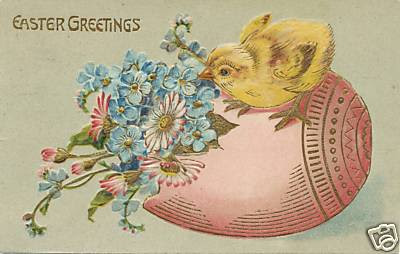 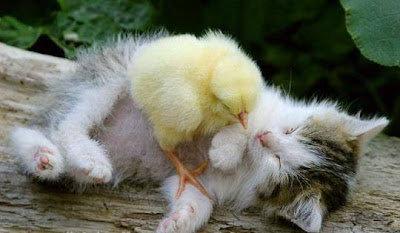 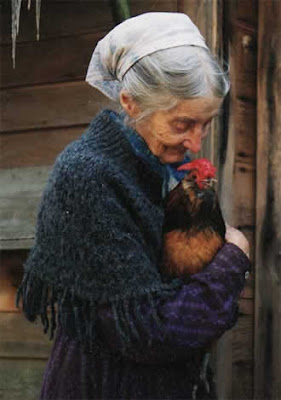 Winslow's Tea Stories
Afternoon tea with Tasha always included
sharing stories from our daily lives with each other. Winslow continues that tradition here.

March 2010
This Tea Story is dedicated to Chickahominy, who passed away late last year.
Some chickens are real individuals. The most notable chicken Tasha ever knew was Chickahominy. His mother was a bearded Belgium bantam that started her clutch of eggs early in spring, and failed to hatch any save one, at which point she abandoned the effort. Rescued by Tasha from the cold, and thawed atop the double boiler on the woodstove, Chickahominy soon demonstrated his penchant for woodstoves, tea, gardening, scrambled eggs, traveling and people, especially Tasha.
Chickahominy often accompanied Tasha on her frequent excursions in the spring to plant nurseries, though he did squawk at tractor trailer trucks, especially those not pulling a trailer. They reminded Tasha of a 'rooster that had lost its tail feathers during the molt.' When Tasha was out gardening, Chickahominy invariably accompanied her. He liked to scratch around for worms and take dust baths, but at the sight of a hawk would rush under Tasha’s skirts. In fact at the sight of a butterfly he would utter the danger call chickens make, but did stand his ground on such occasions and even scratch extra hard at the dirt to show he was not really concerned.
At tea time, Chickahominy balanced on the edge of the porch and kept an eye on things. Occasionally he might request a cracker, but was always content with just one, and after eating would perch on Tasha’s knee, fluff his feathers and settle down with the ineffable contentment only chickens can possess. He would even utter a few quiet notes, shut his eyes and take a nap.
When Chickahominy was very little, Tasha would put a small towel under him and tuck him into her dress, just above the waistline where it is tied. On one such occasion Tasha went grocery shopping, and at the checkout counter the clerk paused, looked around and said: “Do I hear a chicken?” Without a moments hesitation Tasha explained her hearing aid occasionally made such sounds, though it might be mentioned she never did wear one.
During the winter Chickahominy lived indoors, for his traumatic hatching and subsequent abandonment by his natural mother predisposed him to sensitivity to cold. He lived in the loom room in an airy coop, and flourished on a diet of green peas, the occasional scrambled egg, cracked corn and Breton Original crackers. There was some friction between Chickahominy, the corgi Megan, and Lazarina, a rock dove Tasha rescued in circumstances similar to Chickahominy’s. The difficulty with Megan began shortly after she was picked up from Boston following her transatlantic flight from England. Chickahominy greeted Megan by pecking her on the bottom, and she never forgave him. Lazarina, a good flyer, had a fondness for Breton crackers as well, and would sometimes alight beside Chickahominy when he was enjoying one. This was not to his approval, and he would flap his wings at her and suggest she move on. On such occasions Tasha would say it is not a peaceable kingdom.
Chickahominy was afflicted with a proclivity towards one thing in particular: Shoes, especially when on someone’s feet. Like an 18th century gentleman, he can’t resist a well turned ankle, Tasha would remark from the kitchen when a visitor was greeted by a flapping of wings and a beak to the foot. After Tasha passed away in June 2008, Chickahominy went to live with Amy and Winslow, where he spent considerable time in the summer cruising around the gardens with the bantam hen Annadama, and later her brood of fluffy chicks. He did miss Tasha, however, and occasionally headed through the woods to her house around four in the afternoon. Perhaps he hoped to find her on the front porch having tea. Chickahominy passed away last November. He was fourteen years old. Before you put your tea cup in the sink and leave, please click here to see the most delightful group of rescue knitters for a worthy cause you have ever seen.
Posted by MISS PEACH ~(^.^)~ at 12:01 AM

Dear Misses Peach!
wow you look so comfortable with your dad!Adorable picture.Also this story is really beautiful.So sorry to know that Chickahominy passed away.She is now with all adorable angels in a beautiful garden full of flowers.
My mommy Léia grow up on a farm in Brazil and she told me she has beautiful memories from her childhood with sweet animals and her grandmother.
Thanks so much for this beautiful post you always brings happiness to my day! :)
God bless you
purrs and love
Luna - We love LUNA

What a nice way to spend the morning, Misses Peach; we know LapDaddy enjoyed you keeping him company...That was a very sweet story; all animals are loving and loyal if raised that way= Chichahominy and Tasha had such a special bond...The hens with sweaters is a sweet idea too; it's nice to read about really caring people in the world...Have a great day...xo...Calle, Halle, Sukki

You look SO content with your LapDaddy! We're happy to hear you had such a lovely morning, sweetie. And what a touching story. Sorry to hear Chicahominy passed away though. We hope you have an even better afternoon and evening!

You look so content with LapDaddy! That is a wonderful story! Thanks for sharing

I think that is an excellent way to spend the day--reading with your people.

Hello Miss Peach, you surely seems very comfy with your lapdaddy =)
Thank you for sharing the wonderful story with us too :)

Oh what a story Misses Peach - thanks for sharing it with us. It did bring a tear to mom's eye.

And you look very happy sitting with your lapdaddy there!

Oh this is such a delightful story. Mommie read it to me and I sat very quietly on her lap too. Chickahominy is a cute name and she is now in heaven. She had a very very good life!
You look very cozy in your lapdaddy's lap. Isn't snuggling great?!

Hello Ms Peach,
I like story time around my house too.
Your moms story was pretty darn interesting - I never met a chicken myself (City cat, you know) but have seen pictures of them.
You sure did make yourself comfy on Lapdaddy - bet he loved having you around.
Purrs,
Genghis

Hi Misses Peach!! We loved your LapDaddy picture and are so glad your Olympics were fun!! Thanks for sharing the great story of Chickahominy, too!!
Your TX furiends,

This is a delightful post, Miss Peach! The pics remind me that Easter is coming.

Oh what a wonderful story Mommy Karla! Chickhominy was certainly a most wonderful bird and Tasha was such an amazing woman. The story of their bond made me teary eyed. I would like to think they are together, wandering blissfully through beautiful gardens.
Misses Peach, you look so cozy with Lapdaddy. How nice that you could snuggle with him.
Helena e-mailed me a link to that knitting for Hens story and I just adored it! Hearing about gentle kindnesses towards animals makes me feel all warm inside. I wish everyone could be that kind.
It's always a lovely treat to visit the Cozy Cottage and take a break from the troubles of the day.
Lots of Love and good luck with the Fairy wings Mommy Karla!
Lorianna

Dearest friends in the cozy cottage. What a story! And what a great idea to knit sweater for the hens. Also a way to draw attention to this deplorable state of affairs. There are the poor battered chicken all over the world. I've been no more eating grilled chicken from a market for years. And we only buy organic eggs. They are more expensive, but the taste is better and above all, no chickens are tortured.
Warm weekend wishes from Birgit and the furry friends

Dear Misses Peach, You sure look snuggled up with your Lapdaddy. And Mom love the story about the chicken. She had 2 chickens a long time ago.

What a neat story about Chickahominy. I have been a Tasha Tudor fan for years but never had the opportunity to visit her farm. I have some of her books and rubber stamps! She was a "real" Vermonter and our world was better for her having been in it.
Lorraine,
a transplanted Vermonter! 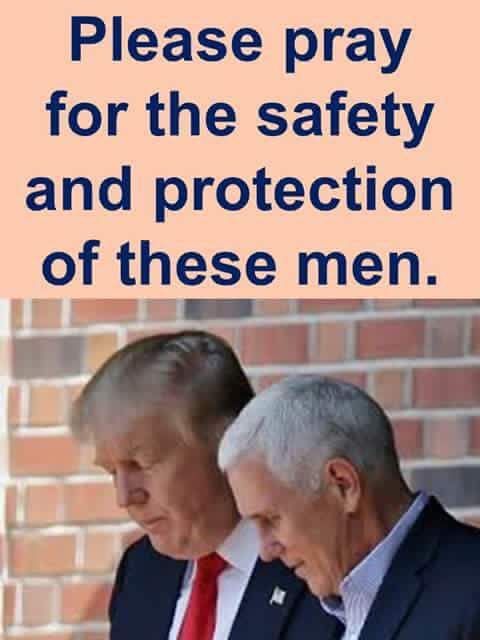 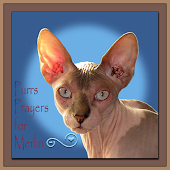 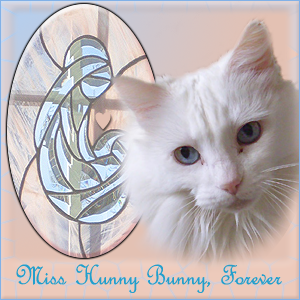 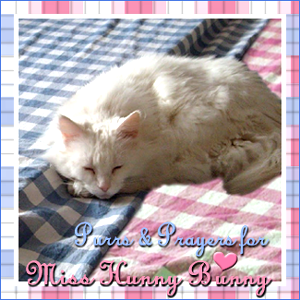 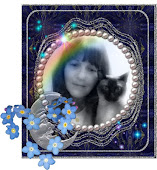 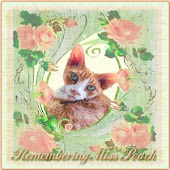 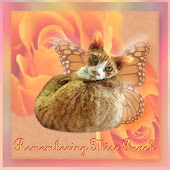 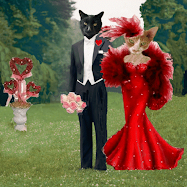 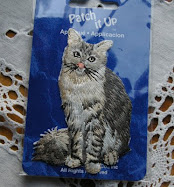 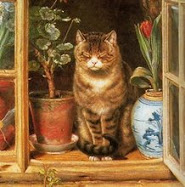 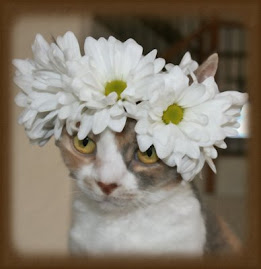 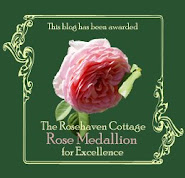 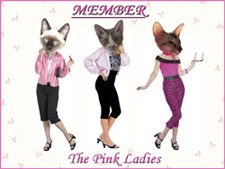 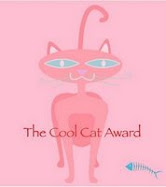 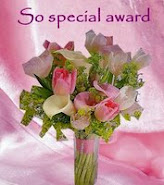 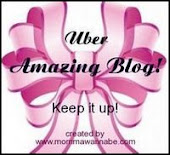 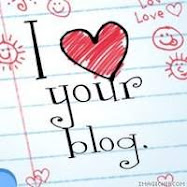 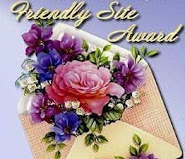 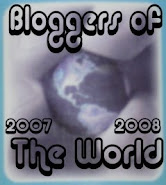 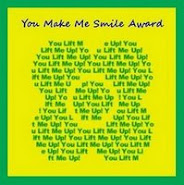 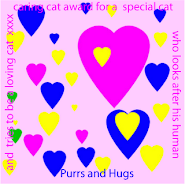 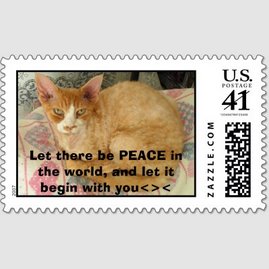